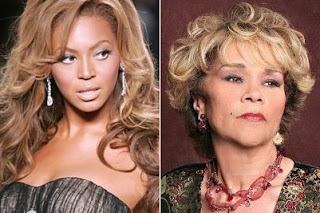 (Originally Published November 2008)  Beyonce Knowles, who must buffer her Scorpio Moon with a diet of Prozac and syrup, tries to tackle the painfully passionate Plutonic character of Etta James in December’s release of “Cadillac Reocrds,” a movie partially chronicling the raspy- throated Aqua who seemed tortured by her Pluto-Sun, Pluto-Venus, and Pluto-Jupiter oppositions.

A huge Adrien Brody fan, I am apprehensive about Cadillac Records. I confess I’m a bit tired of biopics and, once an enthusiastic Beyonce admirer, I’m a bit disappointed in her lack of musical evolution, continuing to gyrate to empty lyrics rather than muster some real substance that would befit her as a lun

ar Scorp and an artist.

I doubt she can pull off the cinematic mirror of an emotionally volatile and wounded alleycat like Etta James. I love Etta. And when I’m in one of my Scorpio spirals downward, I lock myself away with dim lights, rum, and ultra melancholic playlists including songs like “I’d Rather Go Blind” by Etta, and of course the iconic “At Last.”

I heard Beyonce, a Virgo, sing “At Last” during the recently televised Fashion Rocks concert and got chills — as in , my blood ran cold.
Beyonce’s Leo Mars yielded a showboating performance in direct opposition to Etta’s Aqua sensibilities. [smartads]True to her Mars and Leo true node, Beyonce brought glamour, drama, and over-the-top performance. Where Etta is deep, subtle, sultry and slow-stirring, endowing every syllable with sentiment, Beyonce is superficial, hyped and manufactured, making every syllable a stylistic warble.

Perhaps I’m too hard on this Lunar Scorpio. With a moon in the sign of intensity and extremes, you’d think she would have the ability to dig deep. Beyonce has Uranus conjunct moon in Scorpio, giving her the potential to be emotionally impulsive and spontaneous. Perhaps she’ll tap into that energy yet as an actress. Some reports suggests she could be mining Oscar gold with this role and others suggest she comes off less vapid here than in Dreamgirls, but still vapid.

She gets to curse, use drugs, and explore the darkness of additction. When I go to

the movie theatre to see this, I’ll have to bet my chips on whether her carefully concealed Pluto-Uranus dynamic will allow her to find a way to the essence of Etta, which was based on her own war between Pluto and Uranus.

Etta was driven by a strong Aquarius nature. Born Jan. 25, 1938 in L.A., she has not only her Sun, but also her Venus, the planet fueling her creativity and music, in daring Aqua as well, along side an Aqua Jupiter swelling up that need to be original and eccentric. Original she was, one of the earliest female perspectives to the blues. Biographies quote Etta as saying “And as I started reaching deeper I realized that most of the blues of that day was done by men. Women just didn’t have the nerve.”

She had the nerve, but her Aqua nature also made her a bit too sporadic, impulsive and perhaps incapable of controlling her desires. It is said that Aquas are unemotional, while Aquas insist they do in fact feel desire but are clueless and underdeveloped in how to express it. That’s where her fiery Sagittarius Moon and true node come in, allowing Etta to bluntly and unapologetically express her inner self with bawdy spunk, abandon, and often rudeness and a lack of restraint. Such a personality was complicated by Pluto opposite the three-planet Aqua stellium —

thrusting upon society and the music scene a person with lots of unconscious inner conflict that hurtled her to provocative extremes and deep, complex, experiences.

Sounds scary.
She was on the road with no parents as a jazz singer by age 14. By 21, she was addicted to heroin. By mid-20s she was courting a string of violent and abusive lovers (Pluto opposite Venus can lead you to such relationships) and then vanished into oblivion (Pluto opposite Jupiter can cause one to lose popularity and luck. She was often penniless). In her 30s she was said to be completely out of control while doing live performances. Off stage she forged prescriptions and bounced checks to stay high, biographies attest.

Thankfully Pluto is also the merciful giver of survival and rebirth; Etta James reemerged again and again etching out a five-decade career — even rising to win a Grammy while in the throes of heroin lust.

I find surefooted Virgo Suns, such as Beyonce, don’t really have a penchant for freefalling into confusion, emotion and despair quite like someone more traumatically linked to Pluto or the spacey Uranus.

But perhaps her moon will surprise me yet and yield richer undercurrents to this portrayal than I can imagine. The beauty of art is not that it’s perfect and pretty, but that your soul bleeds and stomps all over your creation. Perhaps Beyonce will intuit this.

After all, Etta said of singing her songs “It was like I was laying hold of some part of me that I didn’t even know was there until I let it out.”