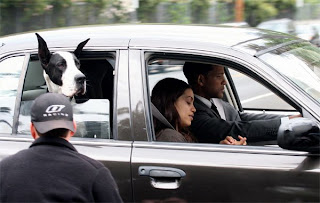 An ode to love, sacrifice, remorse, and altruism, Seven Pounds earns 7 of 8 stingers — not so much for the acting of its leading man, Will Smith, a Libra, who skates on the surface of a very complex character, but for the emotional guts to dramatize a controversial story that will leave you moralizing, judging, and heaving a bit from sorrow.

The following review rates the movie on 8 Scorpio interests:

Warning: Contains Mild Spoilers
1. Defiant Characters– Protagonist Ben Thomas, played by Will Smith, is driven by the suicide principle — which some have called irresponsible and cowardly.

He is driven by the thought that he can accomplish something by killing himself. I’m not telling you what exactly he wants to accomplish, but you can easily figure it out from the reviews and previews. A drama like this is not really about a plot twist. It’s really about the journey of the psyche. And that is what you must seek here.

I’ve never been one for absolute morality. I believe morality is negotiated in the moments. It is not black and white but very complex. And this character, interpreted by Libra Sun Will Smith pursues this moral defiance in a soft, gentle way. His is not the defiance of an explosion, but rather one of slow simmering fire.

Will’s character — Ben Thomas — attracts the same response as his mission of suicide: a little sympathy, a little anger, a litle angst. I mean he’s a kind, mannerable person who obviously cares about people, but he’s also rather abrupt, brash, and rude — allowing him to say really REALLY harsh things.

And this marriage of extremes — of beauty and death — of kindness and ruthlessness– is the fulcrum on which ever scene of this movie tilts.

This movie does not give suicide the same treatment as “Million Dollar Baby.” It presents a different argument, which I will leave it to you to surmise. I feel both movies depict the act as a valiant gesture. This is controversial I know. And well, Scorpios will appreciate that controversy.

I’ve long been fascinated by suicide, ever since my first boyfriend killed himself on his birthday. I study it with detached intrigue. I’m fascinated at how the self-sacrifice of Neptune and the destruction of Pluto merge almost always in some way. My boyfriend’s Pisces Sun and Pisces Saturn were opposed by Neptune and Uranus.

I’m not surprised that Will Smith would be attracted to this film as he has a Scorpio Moon, which makes him interested in the Plutonic culture of death. That Moon is conjunct Neptune, which can idealize death and his feelings toward it, making it a romantic gesture. And so it is in this film.

2. Secret World- “Seven Names. Seven Strangers. One Secret.” That’s the movie’s tagline — one that would draw a Scorpio in right away — were it not so easy to guess the secret. 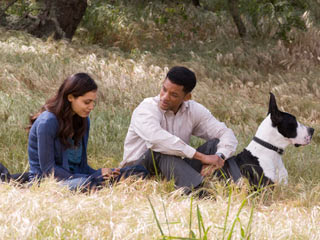 The character himself makes a call to the operator and discloses his mission as soon as the opening credits roll.

That doesn’t ruin things however. The whole mission is a mystery to the 7 people involved and we ride shotgun with them, wondering how Smith’s character is going to execute the details.

As I said earlier, this movie is about the emotional travel through the Ben’s psyche. Is he crazy or sane? Is he good or bad? Is he in love? What will he do for love?
That does not get old. We want to deconstruct the title, his mission, and why he chose these people.

There are lies and deceit — but all for the greater good. This is what Scorpio would argue is the best use of such traits.

3. Obsession & Intense Emotions- The most extreme emotion in this film is guilt, with which Scorpio cannot identify, as they choose to live without regret. But aside from guilt is the strong desire to do good deeds, which Scorpio loves.

Extreme sadness is the anchor for Smith’s character. Screenwriter Grant Nieporte (birthday unknown) said this about how he came up with the story‘s idea: “The story came from I met a gentleman at a cocktail party almost a decade ago now, and just I could tell that he was profoundly sad. He was carrying something around with him, kind of the weight of the world. He was brilliant and didn’t look like anybody else in the room and didn’t talk like anybody else in the room, but profoundly sad.”

If you’re a Scorpio, don’t you feel like Nieporte is talking about you right now? J

He continued, “ I walked away kind of thinking, ‘I’ve never met anybody like that. I don’t know what he’s carrying around. I wonder what he feels responsible for.’ And I found out that he felt responsible for kind of a national tragedy that happened in his work life. And that got me thinking if you felt responsible for the taking of life – one or more – how far would you go to make amends. When is it okay to live again? When is okay to love again? These questions just kind of percolated and I thought eventually it sort of kind of formed into the genesis of the story.”

Marvelous. I was so moved by the story that I really hope Nieporte gets nominated for a Best Original Screenwriting award by the Academy.

If only Will Smith, whom I ador 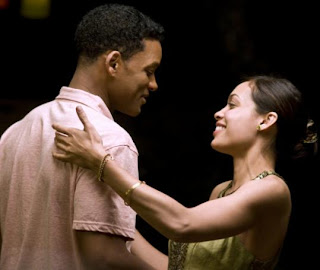 e, could have played this character with more weight. While he is supposed to be filled with this overwhelming sadnesss, Smith only telegraphs this by wearing the same sad face throughout the movie. The gravity of the emotion is simply not felt. And that’s too bad. He has a Scorpio Moon, but somehow the power of melancholy is not being informed by this Moon.

I love to say of Scorpios that we are conoisseurs of emotions. We don’t just feel the blunt and simple ones, we notice the delicate nuances between close strains of similar emotions. While someone can simply feel sad, we can distinguish between a million rich shades of sadness all different. Same with joy, etc. We are channels and lightning rods for emotion from the depths of the Universe and we play it like a song.. And yet none of that raw, authentic emotion is really conveyed in the film. Oh, if it had been (!) — I would have cried even more.

4. The Mystic & The Macabre- Death is a theme of this movie. But so is life. And the blend makes this a Scorpio treat. Unlike “Benjamin Button” which presented death as decay. Seven Pounds presents death as beautiful thing that is rich and painful and with the potential to transform lives. It is perfect Scorpio ethos.

Death is beauty, death is pain, death is healing., death is redemption.

5. Taboo– Obviously the climatic act of suicide is a type of taboo. Many consider the snuffing of life to be the sole right of “God.“ And in breaking taboos one endures a wealth of newfound knowledge and extreme sacrifice. Both are here.

But it is also discomforting. Because we know Ben is planning to check out soon, falling in love is the worst thing that can happen. And so there’s a tragic, ominous feeling to this romance that Scorpio will love. As Scorpios specialize mostly in tragic, tortured and unrequited love.

7. Sexuality –There is one big sex scene. It comes at a crucial moment in the movie where all is falling apart for the protagonist. Because of that emotional cliff he’s on, the sex is unnerving and hot. Despite that, it’s not desperately unhinged like a Monster’s Ball moment. It is tastefully done with simply a string of shots upon the naked union. It’s breathtaking. It is not only titillating but emotionally devastating — well to me, since I was left in tears.

In real life, Rosario’s Mars is opposite Will’s Venus, which can create a palpable and discernible sexual chemistry that they can leverage on screen.

The actors play extremely well off of each other; It’s likely that their venus opposite venus synastry allows them to mirror and reflect each other’s emotions. They often seem cut from the same emotional cloth and we sense the ease they have onscreen together, volleying the quiet energy back and forth.

8. Profound Ideas–
For the premise alone and it’s message about the beauty and the transforming power of death , I will remember this movie and cherish it for the rest of my life.

I also love that it underscores one of my long held beliefs: that love is something you give without expecting anything in return. As Ben Thomas doesn’t live long enough to collect any returns on his mission of love, that theme is very moving and pronounced, especially in the final act.

All too many times we think “I love you, now you love me back.” or I am starting to love this person, do they love me? But love, we’re reminded through this movie, is not something to be bartered. It is too grand and pure for that.

In love, you have to decide that you are going to give love and that’s it. That’s final. That’s the done deal. You have to confidently extend your heart with finality. And if it is unrequited and you get nothing back but the sense of pain and sacrifice — well, then at least you have loved.

… and you have poured out the richest gift from your soul, bar none.